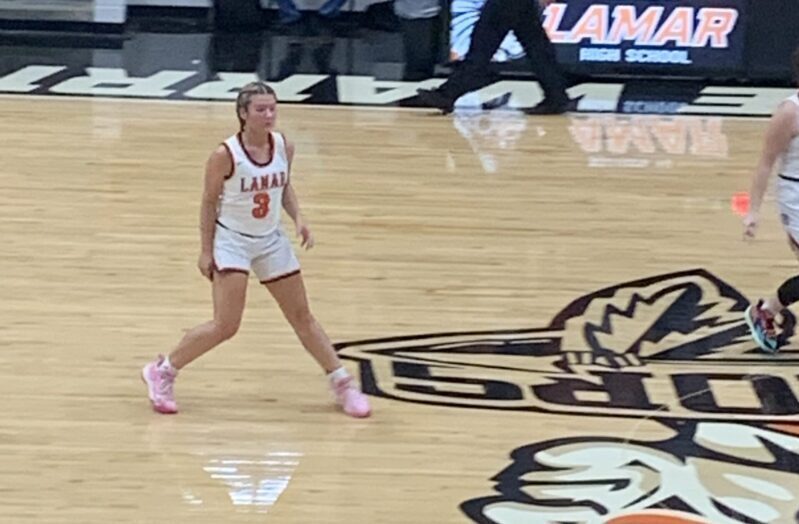 In two previous articles, I’ve identified my all-tournament selections during this highly competitive tournament. However, there were a few surprise performers that got my attention. In this third and final summary of the Lamar Classic, the following list of student/athletes are players to keep an eye on this coming season;

Morgan Cochran-5’4″ SG-Lamar H.S. 2023-Morgan, pictured above, is sneaky fast. She’ll fool you with her speed. She’s a solid player that really has no weakness. She helps bring the ball down on offense. She doubles down and helps on defense. I’d say her game is the “glue” that keeps the team together. Morgan is an important part of the Lamar squad.

Livian Burton-5’10” F-Central Arkansas Christian H.S. 2023-Rebounding and running the floor are Livian’s strengths. At times she gets a bit discouraged but overall when she’s playing her game the Mustangs have success. Look for Livian to pick it up during 3A Region 5 games.

Alyson Greathouse-5’7″ SG-Pottsville H.S. 2023-A solid overall performer is how I would describe Alyson. She can play the point but is more effective at the wing because of her catch-and-shoot skill set. She gets back on defense and can guard just about anyone outside of the paint.

Abree Mc Crotty-5’7″ SG-Hector H.S. 2023-Took her a while to get going, but when she got into the flow of the game, Abree made an impact on both ends of the floor. She is strong with the ball. Needs to work on her weak side, but she is definitely a team leader.

Lauren Nelson Lauren Nelson 5'11" | SF El Dorado | 2023 State AR -6’0″ F-El Dorado H.S. 2023-Lauren has the size and athleticism to match up with anyone. She’s strong and can get up and down the floor easily. She definitely has the D1 body but needs to expand her game to match. If she does that, she’ll reap the benefits at the end of this season.

Annleigh Pennington-5’8″ F-Pottsville H.S. 2023-Annleigh is a catch-and-shoot scorer. She prefers facing the basket on offense, setting up her shot. Defensively she understands the concepts in both man and zone. Offensively she fits right in with this three-point shooting Apaches’ squad.

Stevie Tanner-5’5″ SG-Dardanelle H.S. 2026-Coming in as the first substitution Stevie played as though she was an upperclassman. I was impressed by her defensive skills, however, she hit some important threes as well. This freshman might be starting halfway through the season. She’s that good.

Again, remember these names. They all will play important roles for each of their schools to have successful seasons this coming year.