THE BEST REBOUNDERS IN THE CLASS OF 2023 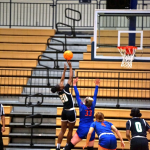 INTRODUCTION: The Arizona class of 2023 has a number of outstanding rebounders. Here’s a look at the top five.

Khamil Pierre Khamil Pierre 6'2" | SF Perry | 2023 State AZ – is a 6-2 senior small forward for both Perry High School and her club team, Arizona Elite. She was selected as the top senior player in Arizona by Prep Girls Hoops. One scout commented on her game: “She created an entirely new world when she dunked. She dominates smaller defenders in the post and is a match-up nightmare in the frontcourt. As a junior, she averaged 21 points, nine rebounds, and 3 blocked shots per game. She will even have bigger numbers as a senior.”

EVALUATION: Khamil is a natural rebounder and her presence in the paint is intimidating to her opponents. Her long wingspan even makes her more dominant as a defender. She has already committed to play at the next level at Vanderbilt.

MYAH VERSE – is a 6-0 shooting senior guard who plays for both Mountain Ridge High school and her grassroots team, Arizona Elite. She recently committed to the University of Georgia. One scout had this to say about her game: “She is a physically strong and versatile wing who does damage with her mid-range shot and hitting the glass. Myah has proven she can hit the spot-up three, defend and rebound. She can potentially fill many roles.” Another scout was quoted on her game: “She has a smooth quick-twitch shooting stroke which is a problem for defenders. She carries a high level of versatility for her team and can be a dynamic weapon at the next level.” She transferred from Flagstaff High School where she averaged 13.5 points and 9.7 rebounds as a freshman.

EVALUATION: It is in rebounding that Myah really excels. She has averaged close to a double-double since her freshman year of high school. With a wide wingspan and razor-sharp hands, she is an incredibly dominating presence in the paint.

Achol Magot Achol Magot 6'5" | C Southern Arizona Prep | 2023 State AZ – is a 6-7 center who plays for both Southern Arizona Prep and her club team, Lady Firestone Nation. She recently committed to Texas Tech. She averaged a double-double as a junior: 12.5 points and 12.5 rebounds in addition to four blocks per game. She also hit 68% of her field goals. In 2021-2022, she was awarded Player of the Game by Max Preps. In one game, against Compass Prep. she had 27 points and 14 rebounds. In a game against East Valley Athletes for Christ, she scored 18 points on 9-9 shooting along with 15 rebounds and three blocks.

KILEY SOURS-MILLER – is a 6-3 senior center for Greenway High School and the Lady Jets 17U, her club team. She is also a transfer from Centennial High School. Her personal statement: “What makes me great is my motivation, love, and passion for the game of basketball. Yes, when we lose I take it to heart but I never give up.” As a junior at Greenway, she averaged 19.8 points, 14.8 rebounds, and 3.9 blocks per game. Kiley averaged over 7 offensive rebounds a game. In her first year at Centennial, she averaged 17.9 points and 16.2 as a sophomore. In her first game as a freshman, she scored 34 points and had 20 rebounds. She shot 16 of 17 from the floor and had nine offensive rebounds. One scout said, “Kiley is a big-time prospect in Arizona and more than capable of excelling at the next level.”

EVALUATION: Kiley stretches the defense with her perimeter jump shot. She is an outstanding defender and rebounder and opposing players take jump shots rather than drive the lane because of her presence. She will definitely be playing at the next level.

Saniyah Craig 6'1" | PF South Mountain | 2023 State AZ – is a 6-1 senior power forward who plays for both South Mountain High school and her AAU team, the Lady Soldiers. She then transferred to Arizona Compass Prep in Chandler. Saniyah is also a sprinter on the track team, competing in the 55 meters, 100 meters, 200 meters, and 400 meters. She has improved every year as a player, both offensively and defensively. Saniyah plays a national schedule in the Grind Session and is well-prepared to play at the next level.

EVALUATION: Saniyah is an outstanding all-around player, both offensively and defensively. She pivots well in the paint and is an experienced defender and rebounder. Last season her numbers improved to 15.9 points per game, six rebounds, and four steals.